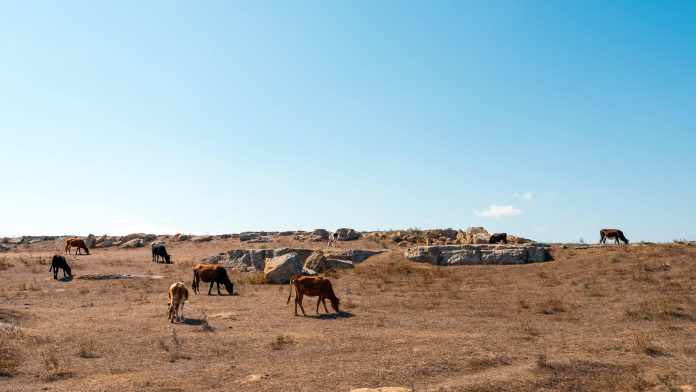 In South Africa, the Northern Cape faces drought that limits human endeavours, which explains the unpredictable progress in livestock production over time. This paper evaluates the impact of agricultural drought on smallholder farming households’ resilience in the Northern Cape. Data from 217 smallholder livestock farmers were collected and analysed descriptively with the help of the Agricultural Drought Resilience Index (ADRI) and Household Food Insecurity Access Scale (HFIAS).

Read more about how to rehydrate the land and stabilise the climate here.

Agricultural drought has a significant impact on livestock production as it disrupts the growth of plants used for animal feed, resulting in delayed livestock growth. Prolonged periods of drought have been identified as one of the major constraints keeping South Africa’s growing demand for meat from being met. Drought therefore comes with a cost and has thus far amounted to significant livestock losses (cattle = 45%; sheep = 46%; goats = 48%)

Most of the households in the study owned houses (90,8%). A farmhouse is an appreciating farm asset, and therefore contributes to the farming enterprise’s economy. This was followed by ownership of wheelbarrows (63,1%). Tractors are another significant asset that farmers can own to increase production. However, the study showed that tractors were the least owned asset (11,1%), the reason being that the study focussed on livestock rather than crop farmers.

The Northern Cape’s ADRI was calculated and 79% (172) of livestock farming households were not resilient to agricultural drought, while the remaining 21% (45) were resilient. The drought had a significant impact on smallholder livestock farmers despite the Northern Cape being one of South Africa’s frequently declared drought zones, and any lack or delay in rainfall is likely to result in a drop in food production, including livestock.

Changes in rainfall patterns contribute to food insecurity in a variety of ways. These include a decrease in agricultural production, household income, expenditure, job opportunities, restricted access to credit due to a lack of collateral and economic resources, and higher food prices. Food security is directly or indirectly related to consumption, employment, credit and saving.

Food insecurity was measured using the HFIAS. Food insecurity was experienced differently among respondents, depending on their spending power and the level of financial well-being. Most of the respondents (71%) worried about not having food, 62,7% ate limited amounts of food and 60,4% ate smaller meals than they felt were needed.

More than half of the respondents (56,2%) ate fewer meals in a day, 55,3% did not eat what they preferred and 55,3% ate what they did not want to eat. Less than half of the respondents (42,4%) experienced not having food in the household, 36,4% experienced going to sleep without food and 34,1% reported going the entire day without eating. Food-secure households had higher resilience to food insecurity, whereas severely food-insecure households had lower resilience to food insecurity (Table 2).

Table 3: Distribution of expenditure and consumption of respondents. (Source: Author compilation based on survey)

Learn how to choose an irrigation system here.

There are difficulties associated with the South African government’s relief programme, which includes livestock feed (fodder) and medication, improved access to agricultural credit and farm input, and increased smallholder farmers’ participation in agricultural drought resilience activities. Resilience activities, such as training and dissemination of information, are among the government’s relief measures. However, this study found that government relief during drought was limited and was not disseminated on time.

It is recommended that improving policy is crucial to enhancing the resilience of smallholder livestock farmers. The policy should not be limited to drought relief, but should also improve access to land so that farmers are able to gather more resources and assets. The government needs to work alongside stakeholders to enhance the resilience of farmers by supporting those who are less resilient. As a result, these policies can help farmers to be more resilient in times of climatic shock.

In general, this study’s findings suggest that governments and non-governmental policymakers should focus on improving the resilience of smallholder farmers by focussing on expanding access to resource bases, reducing food insecurity and delivering timeous drought relief aid. – Prof Yonas T Bahta, Department of Agricultural Economics, University of the Free State

For more information or a list of references, email Prof Yonas T Bahta at Bahtay@ufs.ac.za.

Soil health in a nutshell