In 2019 Rego Malao was crowned SA Stud Book and Unistel’s Emerging Stud Farmer of the Year. With his farming enterprise growing by leaps and bounds, he came up with a first-rate plan to assist emerging farmers, who share his passion for beef cattle production, on their road to success.

On a recent visit to his farm Boschkop near Ventersdorp, it was encouraging to note just how positive Rego is about agriculture in general, and beef cattle farming in particular. And this amid people’s dispirited attitude towards the COVID-19 lockdown.

“It is such a positive message. Except for agriculture, almost all industries had to close their doors during the initial lockdown phases. Whether sick or healthy, people need to eat, and it is the agricultural industry that is putting food on the table and that cannot be closed,” he says.

The minute this realisation dawned on him, he decided to invest all the extra money he makes in agriculture, where a bright future is waiting. However, he also believes it is imperative for government to take a fresh look at farmers and finally realise what food security really means.

A plan to support cattle farmers

His plan to assist other emerging farmers took shape in the North West province when, during negotiations initiated by him, Boran bulls were donated to passionate emerging cattle farmers in order to boost their businesses.

The North West Provincial Government and the Boran Cattle Breeders’ Society entered a partnership in which established breeders agreed to donate ten Boran bulls to emerging farmers identified by the government and who meet certain set criteria.

In order to receive such a bull the emerging farmer must, among others, already own at least 30 cows and must demonstrate his or her passion for cattle farming. The aim is for the participating breeders to promote the Boran’s popularity and to expose emerging farmers to the advantages of such a bull in order to improve their herds.

Scan this QR code with your smartphone to watch a video about this initiative, or follow this link to the Plaas TV YouTube channel: https://youtu.be/dO5lwd5Ff3w.

The project was met with such approval, that it was decided to launch the initiative in all nine provinces, but the COVID-19 lockdown put a temporary damper on its implementation. Once everything returns to normal, the process will go on, he says.

A passion for cattle in his blood

Rego grew up in Rustenburg, earned a BA in Industrial Psychology from the University of Port Elizabeth, and completed a postgraduate diploma in management at the University of Cape Town. However, farming has been in his blood for as long as he can remember, and he sees it as his true calling.

After completing his studies, he was unable to find work. His father, Dr JHK Malao, a well-known breeder of white and red Brahmans, appointed him as herd manager. Rego says his father is his mentor and lecturer at the university of life – the small successes he has achieved so far are all thanks to him. He believes his father gets his love for animals from his grandfather, Ntsie, who in those days made use of oxen to do the ploughing and hard work.

After seven years of managing the stud, Rego eventually got a job with the Rustenburg municipality as a skills and development co-ordinator. He always knew that this would only be a temporary occupation and that he would eventually own his own farm, so every year while working at the municipality, he budgeted to buy five pregnant cows or cows with calves. This was the start of his commercial cattle enterprise, which today consists of approximately 300 breeding cows.

Birth of a Boran stud

After five years at the municipality, he started his own business doing infrastructural maintenance work at platinum mines. He invested the money he made from this venture in commercial cattle and while attending a cattle auction at Derby in 2014, lost his heart on the Boran.

He bought his first Boran bull at the auction and used it on his commercial Brahman and Nguni cows. The bull’s progeny was so impressive that he bought registered, pregnant Boran heifers the following year and registered the Malao Boran stud. Today the herd consists of about 50 breeding cows.

He would like to see support given to all farmers and those who want and can use the land productively, must be assisted. Emerging farmers must be able to work alongside established farmers.

To expand the genetic pool of his stud, he bought another seven heifers the following year. It was during this time that he met Stompie Olivier from the Model Boran stud, who soon afterwards became his Boran mentor.

The second bull he bought was a son of the famous bull, Kijiva, and during the national Boran auction in Parys he bought the bull, HOT 14-07, a son of Cojack from Zianca, bred by Stompie. It is this bull that he currently uses in the stud.

Rego also bought more land and today he farms on 700ha of his own land and an additional 1 800ha of rented land. He says to start farming was relatively easy because his father, an established stud farmer, guided him throughout and he poured his passion for farming into the business. His circumstances allowed him to buy his own cattle and land without the help of the state.

While the government is attempting to assist emerging farmers, the land that is distributed often ends up in the hands of opportunists who cannot or do not want to use the land productively. This means that scarce resources often go to waste.

He would like to see support given to all farmers and those who want and can use the land productively must be assisted. Emerging farmers must be able to work alongside established farmers. In order to prosper, farmers need to work together, and the government must buy into this vision and create a favourable environment in which every farmer can flourish.

The government also needs to protect the local agricultural industry by tightening control over imported agricultural products. “One must look at your own economy first and protect it, rather than promote the economy of other countries,” he says.

The COVID-19 pandemic that has paralysed the global economy has shown us that a country should rather invest in its essential industries, and agriculture is one of them. Everything grounded to a halt, except food production. Investing in agriculture is crucial to strengthen food security, as this will alleviate the country’s vulnerability in times of crises.

Despite the worldwide catastrophe, Rego says he is excited about the future of agriculture and especially that of beef cattle farming. The dark cloud definitely has a silver lining and he believes farmers and the country will again thrive.
– Andries Gouws, Stockfarm

For more information, phone Rego Malao on 082 634 1629 or send an email to bashabaafricapojects@gmail.com. 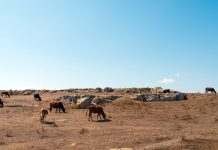 The impact of agricultural drought on smallholder livestock farmers