Mining and agriculture are two industries often placed at opposite ends of the spectrum. Politicians like to play the mining card when making promises of better lives for South Africans, since new mines mean more money, more jobs, rural community development, wealth and progress.

However, important issues are often concealed, such as the fact that mining resources can be depleted in a relatively short period, mining technology has changed to such an extent that fewer workers are needed, and food security can be compromised with mines encroaching on agricultural land. False claims are bandied about that farmers own too much land, that they need no permission to obtain underground mining rights, and that they play no active role if other parties want mining rights on their farms.

Janse Rabie, head of policy for natural resources at Agri SA, says South Africa, like any other country, has limited agricultural land at its disposal. “When mining rights and licences are handed out, there is less land available for agriculture. In most cases farmers pull the short straw when it comes to competing for clean water and this water competition is intensifying. It makes me wonder if agriculture and mining can happen in the same place.”

Janse says that good legislation and regulations are in place to protect landowners, the environment, agriculture, the community and the mining companies. “There are numerous conditions that every prospective miner must meet before he or she is allowed to commence mining activities. In addition, all parties are included before any contract is signed.”

The DMR, in particular, is adamant that mined land is returned to the owner in the same, or in a better, condition when mining is over. The only way to achieve this is through legislation.

Mining companies must conduct environmental impact assessments and illustrate how they are planning to rehabilitate the land. It is the duty of the affected farmer and the DMR to see to it that the company keeps its word.

“The mining company must let the DMR know what impact mining will have on the environment, the long-term consequences of the mining activities and the steps that will be taken to protect the environment.

“The environmental impact assessment should include an environmental management plan, which outlines specific steps to protect and rehabilitate the environment during the construction, operation and shutdown phases,” Janse explains.

Charl de Villiers, a farmer in the Prieska area whose farm is being mined for diamonds, says mining companies are mandated to create a R5 million to R10 million fund with the DMR to be used for rehabilitation if the company fails in this regard.

However, according to Charl, rehabilitation can cost up to R40 million and many mining companies would rather lose the deposit with the DMR than pay the actual cost of the rehabilitation out of their own pockets. “This is how they shift accountability onto the DMR. Many farms lose their value once the mines have packed up their equipment and left. In these cases, rehabilitation becomes the landowner’s problem.

“A mine makes quick money in the short term, but mining renders the land worthless for hundreds of years to come. When the land is used solely for agriculture, we can generate a profit from that land for many generations.”

Mining is a reality in South Africa, and it cannot be wished away. But the impact a mine has on a farm or a community is so great that this cannot be overlooked either.

Janse says the impact of mining on a farming community can be enormous. “Even if the mine is on the neighbouring farm, it may have an impact on your farm.

“Problem areas include the impact on water quality and quantity, air pollution, the farmer’s infrastructure, soil pollution, visual impact, noise pollution, impact on biodiversity, heritage sources such as family graves on the farm, soil vibration, and socio-economic impacts, which are sometimes associated with increased crime due to increased worker numbers.”

Charl says he has experienced many of these problems since they started mining diamonds on his land. “The dust is sometimes so bad that it affects the pastures on my sheep farm. It also poses a threat to my pecan trees, which have been around for more than ten years and which should have been ready to harvest by now.

“One of my concerns is that mined rocks and soil are thrown into the watercourses on the farm. This means the soil is on its way to the Orange River, which runs through my farm. It also causes the development of erosion gullies, which can lead to further damage.”

The flipside of the coin

There are two sides to every story and discussions with mine managers and owners reveal that there are those who do a great deal more than what is required to rehabilitate land. Hennie van Wyk, owner of a diamond mine in the Prieska area, sees diamonds and nature as a gift from God. Apart from being compelled by law to rehabilitate land, he also believes people have a duty to leave a place in a better condition than they found it.

According to him, farmers are quick to complain about mining activities on their farms, despite each farmer receiving substantial financial compensation. “I believe it’s also the landowner’s duty to help rehabilitate the land. There is room for both miner and farmer on the same piece of land, but then each party must comply with the agreement and act according to the law.”

During a visit to his mine, Hennie’s manager, Marius Swanepoel, explained that it is very easy to rehabilitate the land. “We firstly call in a geologist who gives us an indication of where to mine. The shafts we mine are usually around 100m x 80m and we remove the soil in layers. We first take off the topsoil and set it aside. After that, the limestone layers are removed and crushed before we reach the actual diamond-bearing gravel.

“Once we’ve finished with a shaft, we start on the next one. The gravel from the previous shaft is poured into the shaft, followed by the crushed, broken limestone and finally the topsoil. Rehabilitation therefore forms part of our day-to-day business and the cost to improve the agricultural land is minimal. As the gravel and limestone layers are no longer as compacted, this part of the farm is much more fertile.

“In addition, the area is also cleared of alien vegetation. After we’ve finished with a piece of land and restored it to the way it was before, we usually sow a good grass seed mix that will thrive in the area. Within a year or two, depending on the rainfall, the farmer will have good grazing once more.”

Marius says they do much more than just rehabilitate the land. As part of their mining licence applications, they also need to do a botanical study of the land they want to mine. This way, endangered plant species are noted. In the area they are currently mining, the shepherd’s tree, quiver tree and species of Euphorbia (noorsdoring) have been identified as endangered plant species, and much effort goes into their conservation.

“Everything you need to do is set out in the environmental laws and if you stick to these laws, it’s easy to improve or at least restore the agricultural land. If you comply with the rules, regulations and laws, it will cost you less than the rehabilitation fund would cost you.”

He explains that each mine must put into place a water usage plan, which should indicate the minimum amount of water to be used and how to improve the system. A lot of water is used in diamond mining, but they have built large silt dams that filter the water through sand for reuse. In addition, the silt dams leave good quality, fertile soil behind.

“There is space on the same piece of land for miners and farmers. There are also laws and regulations in place to protect each party and, above all, to protect nature. It all depends on whether all parties act according to the law,” says Marius.

Safeguarding homeowners against the unlawful use of aluminium phosphide 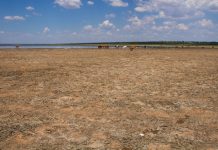