In the red meat industry, respiratory diseases have the most severe effect on a farming enterprise. Preventative action is very important, as is correct identification of the disease and giving the right treatment.

Respiratory diseases in cattle are primarily caused by viruses that damage the animal’s respiratory system. Bacteria then cause further damage, leading to pneumonia. A number of environmental factors contribute to the occurrence of pneumonia, such as the weaning process, transportation of animals, relocating animals from different geographical areas and introducing them into the herd, dust in the air, varying day and night temperatures, and poor immunity in calves.

Acute cases of pneumonia, with accompanying weight loss and the high cost of antibiotic and other supportive treatment, are some of the factors responsible for major economic losses.

Apart from diarrhoea, pneumonia is one of the major problems found in feedlots and calf pens. While environmental factors do play a big role, there are also several stress factors that can give rise to this disease. Dr Pamela Hunter, a veterinarian and animal respiratory disease expert, says calf pens with poor ventilation and high humidity, increase the susceptibility of calves to respiratory disease. “When the pens are not regularly cleaned, the build-up of ammonia will irritate the lungs,” she explains.

Dr Hunter adds that poor management can also lead to respiratory disease. Cases where calves are weaned too early or are placed in groups before ingesting sufficient solid feed, can also lead to pneumonia. “However, the opposite is also true. Overfeeding calves with milk or a milk substitute, leads to the production of a lot of urine. The calves are left wet and uncomfortable for most of the day, which can also create problems.”

She explains that pneumonia often occurs in dairy calves between the ages of six and eight weeks, when their colostrum immunity against respiratory micro-organisms starts to wane. “These calves should be treated with antibiotics very quickly to ensure good recovery. If the condition becomes chronic, calf growth is poor and these calves cannot be used as replacement heifers.”

Dr Hunter says gangrenous pneumonia usually occurs due to incorrect dosing or inhalation of rumen content when animals with certain diseases, such as milk fever, lie on their sides. Disease symptoms in this case are that cattle become feverish one to three days after the incident and have difficulty breathing.

According to Dr Hunter, the best treatment for cattle that develop respiratory disease is to treat them with antibiotics immediately. “In the case of gangrenous pneumonia, the mortality rate is usually high because the bacteria that end up in the lungs, cause necrosis of the lung tissue. When germs in the lungs are suspected, the veterinarian must be called in and the animal immediately treated with a broad-spectrum antibiotic.”

Her three ‘don’ts’ during dosing are:

Dr Hunter says preventive action can save the producer a lot of effort and money. “Prevention means vaccinating animals with combination vaccines and eliminating factors that can cause infection. This includes avoiding auctions, providing shelter, limiting dust and the handling of animals, and limiting groups to about 200 head of cattle,” she explains.

Tuberculosis is also a major cause of respiratory disease in cattle in South Africa. This disease causes lung infection and emaciation. As bovine tuberculosis is a controlled disease, it is mandatory to have animals tested before they are purchased.

Lungworm is a parasite that occurs especially in cool, misty coastal and mountainous areas. Infestation with this parasite may look similar to pneumonia, but the animal must be dewormed to treat it effectively. –

For more information, send an email to Dr Pamela Hunter at pete.pam@iafrica.com. 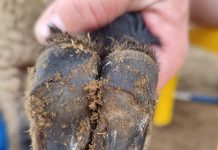