Teff (Eragrostis tef) is an indigenous North African staple, but in other countries it is becoming known as the latest super grain. Ancient grains have recently been making a comeback globally. Forgotten grains such as quinoa (Chenopodium quinoa), millet and teff are becoming an essential part of the human diet once again.

Teff has been hailed as the next big super grain by The Guardian and The New York Times, among other major publications, and is valued for its high nutritional value and gluten-free properties. It was also pointed out recently as a significant consumer trend for South Africans to take note of by consumer specialist, Nadia van der Colff, at a recent Standard Bank Agribusiness function held in Pretoria, Gauteng.

Author and professor of biotechnology at the University of South Wales in the United Kingdom, Denis J Murphy, notes in his 2007 book People, Plants, and Genes: The Story of Crops and Humanity that teff was one of the earliest domesticated plants. The grass is believed to have originated in Ethiopia and Eritrea between 4 000 and 1 000 BC. Even today, teff is a staple food in Ethiopia and was grown by an estimated 6,3 million farmers in 2012, covering more than 20% of the country and yielding almost four million tons in 2013.

In 1996, the United States (US) National Research Council (NRC) characterised teff as having the “potential to improve nutrition, boost food security, foster rural development and support sustainable land care.” Teff production has spread to many western countries, especially for the grain’s nutritional value. Teff is grown in the US, mostly in the states of Idaho and Nevada, with more than 40 000ha being planted for human and animal consumption in 2010.

In Australia, teff produced for human consumption is a relatively new industry and the grass has been grown in experimental quantities since 2014. Even South Africa has joined this movement.

Although teff is relatively unknown to local consumers, South African producers have been producing teff since 2009. It all started when Charles Wessels, marketing director of Teff Growers South Africa (TGSA), decided to produce teff as feed for his polo horses. In terms of human consumption, the sector has rapidly expanded and now produces teff for a lucrative export market.

TGSA is the company responsible for the production, milling and exportation of teff in South Africa. Local production has reached between 6 000 and 8 000 tons per annum, which is produced on a minimum of 12 000 to 16 000ha. TGSA is currently developing new cultivars to improve its yield on crops planted.

When compared to other locally produced grains, it does not result in a massive yield, but according to grain sourcing manager, Hannes Maartens, they are attempting to not produce more than the market demands every year. In contrast, the March 2017 crop estimate for sorghum, a local indigenous grain, is 153 480 tons and the estimate for white and yellow maize – South Africa’s biggest grain production crop – is estimated to reach 14,324 million tons this year.

The industry relies mostly on contracted farmers. Currently all these farmers are based in the central regions of the country, such as the Free State and surrounds, in particular in Bloemfontein. The dry climate in this region is very conducive to growing teff.

According to Lisa Long, marketing manager at TGSA, the long summer season and adequate rainfall in this area are beneficial. Teff prospers in high altitudes, and this contributes to the successful production of this grain in the province, with the Free State being above sea level.

According to TGSA, teff is a highly efficient crop. Just one pound (0,45kg) of teff is required to sow an entire acre (0,40ha) of land, sprouting in only 36 hours – the shortest time span of any grain – and yielding up to a ton of grain in as little as twelve weeks.

Both white and brown varieties are produced in South Africa. The grain is produced both under irrigation and on dryland. Crop protection is generally used, but according to Long they have also production started organic production as of 2017. This is due to a high demand for organic teff from international markets, especially Europe.

Read more about the signs of nutrient deficiency in plants here.

Teff is harvested three months after being planted. Planting season is from October to December and harvesting takes place from January to March every year. With teff being such a quick and easy crop to produce, it serves as an ideal crop diversification. However, according to Long the industry already has an abundance of farmers contracted to produce teff.

Once harvesting is complete, the teff is processed using cleaning methods to produce a clean, edible grain. The grain is consumed by humans, while the grass is processed into hay bales and used as fodder for animal feed. A portion of the cleaned grain is milled using stone mills and modern machinery to make teff flour, which is a suitable alternative to wheat flour for gluten-free diets. Teff is not yet available to purchase on shop shelves and can mainly be sourced by contacting TGSA.

In South Africa, teff is still relatively unknown among consumers and not usually used for human consumption. Therefore, the majority of produce is exported and amounts to approximately 6 000 tons per year. When it comes to exporting, the question is always whether the market is sustainable. “For us, yes,” says Long. “We have long-standing global clients who buy only from us. We currently export industrial volumes globally.”

TGSA only mills the product into flour, but Maartens says there is potential for grain in popped or milled form for various products related to baking, cereals and sports nutrition. According to a December 2016 article by FoodNavigator, TGSA is also looking into exporting an annual 50 000 tons of forage from the crop as animal feed.

The question that comes to mind is: Why the global hype about this ancient grain that is still relatively unknown to local consumers? The answer lies in its nutritional value. According to the South African National Research Foundation (NRF), teff is high in dietary fibre, iron, protein and calcium. A 100g serving of teff contains 336kcal, 58,9g iron, 10,5g protein, 73,1g carbohydrates, 157g calcium, 3,1g ash, 3,1g fibre, 2,7g fat and 366g phosphorus.

Furthermore, its popularity also stems from the fact that teff is a gluten-free grain that can be used to replace wheat. It can be enjoyed as a wholegrain or in various baking goods as flour. Teff can be used in cooking in the same way as millet or quinoa, but cooks faster because the seeds are much smaller. It is extremely versatile in the kitchen, with uses ranging from grain salad, porridge and cereals to snack bars. It has a nutty, grainy taste and adds texture to dishes.

It can be boiled like rice, quinoa and other grains by adding a 1:3 ratio of teff grain to boiling water. Teff can also be steamed. Its flour is used in baked goods and is especially popular for use in gluten- free bread, pancakes and other baked goods. In Ethiopian cooking, it is traditionally used to make injera, a sourdough flatbread. – Ursula Human, Plaas Media 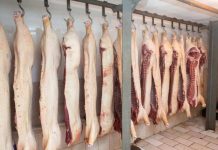 Abattoir hygiene is crucial for quality