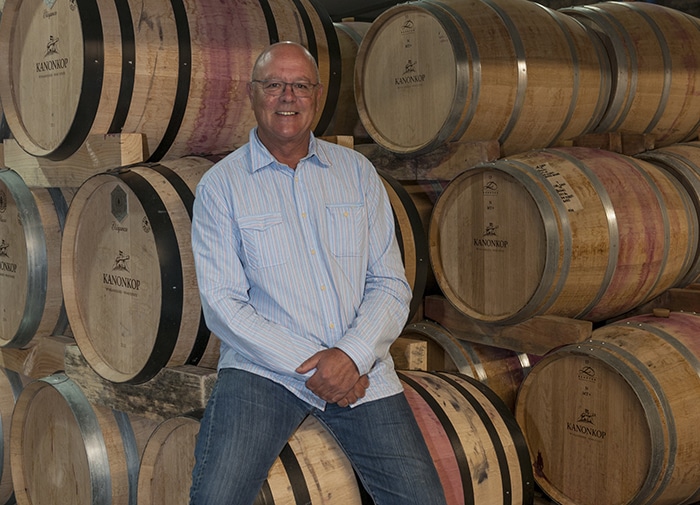 Johann Krige, co-owner of Kanonkop Wine Estate in Stellenbosch, has been selected as this year’s president of the International Wine and Spirits Competition (IWSC), the world’s leading competition for finding excellence in international wine and spirits. Krige becomes only the second South African to achieve this honour, the other person being the late Dr Anton Rupert from the then Rembrandt Group, who was president in 1996.

According to Christelle Guibert, overseer of the IWSC, the UK-based organisation each year honours a president whose contribution has been a real advocate in the world of wine or spirits in any number of guises. “The president is selected for their stature and reputation in the international drinks industry, someone who is viewed as the embodiment of the IWSC’s key goal of recognising quality wines and spirits throughout the world,” she says.

“These individuals are chosen for their achievements in the industry, and for their work in promoting wines, our industry, and the people that make our industry so unique. It gives us great pleasure in inviting Johann Krige to join the IWSC list of presidents for 2022. It has been many years since we have had a president from South Africa, the last being Dr Rupert in 1996, so it’s high time we recognise the development and growth of the South African industry.”

Kanonkop, situated in the Simonsberg region of Stellenbosch and recognised as South Africa’s leading red wine farm, is no stranger to the IWSC having on four occasions won the annual competition’s award for Winemaker of the Year – once with Beyers Truter in the cellar and three times for Abrie Beeslaar, Kanonkop’s current cellarmaster. Kanonkop also took the IWSC’s Outstanding Wine Producer Trophy in 2019.

Krige says being selected as IWSC president is a tremendous honour both personally, as well as for Kanonkop and the South African wine industry.

“As co-owner and CEO, my place is never in the limelight – that spot goes to the winemaker and the teams in the vineyards and the cellar who are able to honour our farm’s terroir with wines that have achieved greatness on the international stage,” says Krige. “I have always believed in the stature of the IWSC and the way in which the organisation goes about recognising excellence in wine and spirits, as well as its role in promoting that excellence among global audiences. As president I will assist the IWSC in any way possible in achieving its goals for the year. And as a South African producer, I am proud to represent our country’s incredible wine industry at a time when its international stature is growing.”– Media release, Kanonkop